The Oasis Wiki
Register
Don't have an account?
Sign In
Advertisement
in: Pages with broken file links, The Architects

"Don't call yourself a god if you can't even swat a fly."
– Enninisotera

Enninisotera is an Architect known best for her affinity with, and command over, insects.

She is currently a student at Tempo Academy studying Dark Arts, Minion Management and Entomology at a major level. She also studies Woodworking, Textiles and Gemology at a minor level.

Enninisotera's appearance varies depending on her Tier level. Across all tiers, she tends to wear black sleeveless dresses with golden designs and butterfly-designed shoulders. She wears black tights usually, and almost never wears shoes. She usually has a silver necklace depicting a dragonfly hanging around her neck, and crown-shaped bracelets on her wrists. Her antennae are quite small and pointy, and her right one is adorned with a red bow. She has a black iron crown resting firmly on her forehead, with a quality cut amethyst placed slap bang in the middle.

Although young and small, Enni acts vain and prideful, spending an unhealthy portion of her mornings in front of mirrors. Throughout the day she makes the occasional burst of self-praise, though more often than not for comic purposes. Her appearance is that of a child, and she is often treated like one by the other deities of her origin world, much to her disdain. She easily succumbs to flattery, especially regarding her cuteness. She gets envious of others if they receive more praise than she does, especially those less experienced than her.

Enni promotes order and discipline, showing an almost militaristic sense of leadership over her bug minions. Since she values obedience, she also shows due respect towards those in authority. She brims with confidence, but also a great deal of impulsiveness, and is prone to ending up in trouble because of her rash actions. She insists on taking full responsibility for all of her mishaps, detesting the idea of becoming a lazy princess figure who sits in a castle and has other people doing all of her dirty work.

When she's relaxed, Enni can be humourous and even gleeful, albeit judgmental. Conversely, trying to have a serious conversation with her, while not impossible, can be more of an effort than it's worth. Her youth comes with a degree of immaturity, which she will often exercise when addressing matters that don’t interest her.

Aside from bugs, she also has a soft spot for mice and bunny rabbits. She seems to also enjoy hanging with children.

Enni typically favours vegetarian food, though she does revel in the irony if fed poultry. She can eat meat, but often chooses not to. Her personal favourite food is plain old bread rolls, though she particularly dislikes cinnamon.

Her digestive system is robust enough to handle stale or unconventional foods without too much trouble, but she tries not to make a habit of eating junk. Her tongue can still sense bad taste.

Enni does not handle liquor very well, and is more likely to lose consciousness than enter a drunken stupor.

Papylon, a land of marble temples, pretty flowers, and bug anthropomorphs called Swarmlings, lived in harmony and prosperity for many years. Across the sea, the Swarmling tribes of the nation of Eniscis had grown envious and raised arms against Papylon in order to seize the fertile lands for themselves. Thus, war was declared, and brought to a swift close only a few months later, the Papylonians suffering a crushing defeat. Papylonians would pray fervently to their gods to relieve them from the following dark age known as the Toasterfly Regime and, as if to answer their pleas, a saviour was born to take back the land several decades later.

Enni... is not that saviour. Instead, she is an insect deity born from the surplus faith collected from the prayers of the Papylonians towards the end of the Toasterfly Regime. Though created without purpose, she applied to be a candidate for the prestigious title of Swarm Goddess of Judgment, one who watches over all bugs and Swarmlings and takes note of their deeds in order to assign them an appropriate afterlife. She hopes that this will instill fear of the gods into the Swarmling people so that they don't fight amongst themselves, but it's a lot of responsibility that she doesn't deem herself ready for yet.

While studying with her fellow deity candidates, they were alerted to a new rift opening up unexpectedly in the Gateway Temple. This was later discovered to be a cataclysm.

When the four deity candidates approached, Enni suddenly received the gift of creation: The Architect's Key. However, at that point, she was not given the knowledge of how to use it. To find the answer, Enni ventured into the Arc. While she was there, she hoped to gain some experience from others gifted with the Architect's Key, and potentially use the alternate multiverse as a platform to fashion herself a world of her own.

The environment of the Arc was a huge step above what Enni had been accustomed to. The sheer brilliance of it all had triggered a transformation in her. A regression, as it were, into her Larval Form as she felt so small in this vast new world. Her attempts to revert back into her original Dragonfly Form all ended in failure. She was expected to prove herself before unlocking her powers, not to the Archons but to herself to be responsible enough with the gift of creation that had just been bestowed upon her.

When she arrived at the Arc, Enni's first creation was a simple flight of stone steps. She used it to descend safely. At the bottom she met with Alba Theanna, who accompanied her to the Quasar Bazaar. It was here that she, after obtaining and devouring a delicious bread roll, found a direction to go to answer her curiosities about the Architect's Key. That's what brought her to Tempo Academy.

Enninisotera originated from The Papylon Pantheon, a collection of deities that watch over the holy land of Papylon.

As swarm deities born from faith, the concept of family is different to the kinds of ties normally associated with mothers, fathers, brothers and sisters. Family ties are instead something to be applied for if both parties are in agreement. Her only sister, Lanapiriida, was merely another deity who grew up in the same part of Celestial Papylon as herself. They got along famously, so they applied to be sisters.

Enninisotera is one of four candidates for official positions in the Papylon Pantheon. Lanapiriida, Kikochenahli and Nymphexandien make up the other three, respectively applying to be deities of Judgment, Music, Communication and Protection. The four of them study together and though they bicker at times, they can easily be called a friend circle.

See main article Enninisotera/Abilities for further details on these abilities. 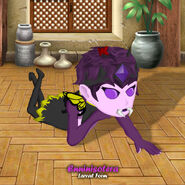 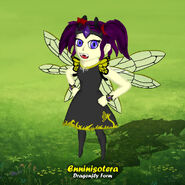 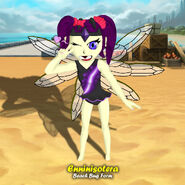 Enninisotera in her Dragonfly Form, and in a swimsuit! Drawn by Ayu 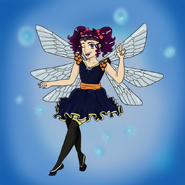 Dealin and Enninisotera, drawn by Jaga

Community content is available under CC-BY-SA unless otherwise noted.
Advertisement